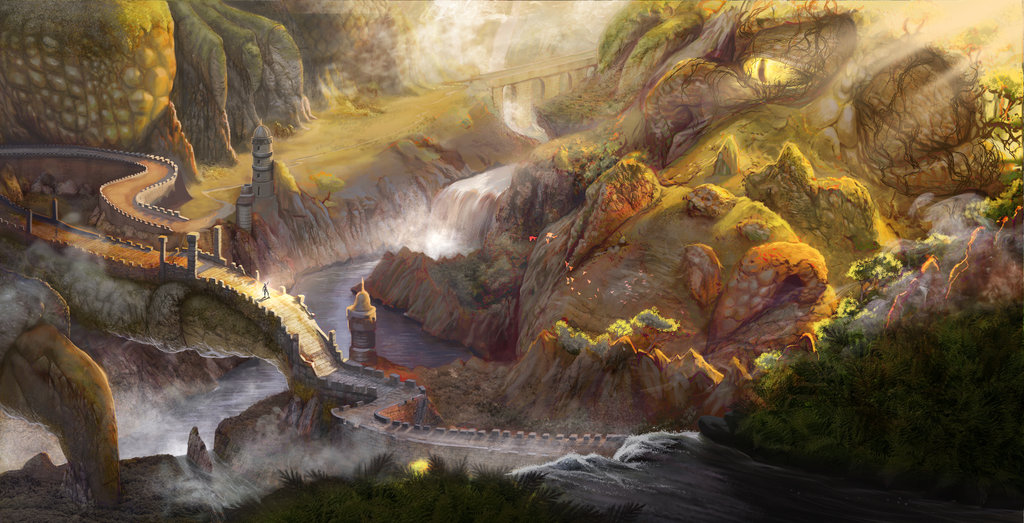 Here is the detailed process of the collaborative work Garrett and I did on the “Dragon’s Pass” illustration.  I also mention a bit about how we got to know each other and had the opportunity to collaborate.

We met in Painting Drama 1…

Garrett and I collaborated before in Painting Drama 1, a composition class held by Chris Oatley that I highly recommend. We both had to render each other’s lineart in grayscale.

I was already impressed by how great Garrett was with details. Do you see those two white dots in the top right pictures? Those are birds, very tiny birds that made this scary canyon seem even deeper ! I loved what he did with my lineart and I definitely enjoyed working with his. Maybe we should color those one day. What do you think ?

…and worked together on Encounters with the Imaginary vol-1

With other alumni from PD1G4 (Painting Drama generation four), we kept working together and created Boneshaker-Press. We kickstarted our first artbook in 2016: “Encounters with the Imaginary vol 1” that I co-managed with David Joyce and where Garrett did a tremendous job around social media to promote it.

There, we got a taste for artistic collaboration by each working with others to create the chapter illustrations of the book. I mentioned our collaborations with Nick Jizba and Jeszika Le Vye  in the following blog posts at Boneshaker Press’s website:

I think Garrett is incredibly talented, especially at character design and rendering. Where he could spend hour exploring forms and detailing, I get bored and just want to start another painting or make new thumbnails.
That’s great because thumbnailing, while being my comfort zone, isn’t Garrett’s favourite part.

So we had the beginning and the end of the collaboration settled; it would start with me thumbnailing and Garrett rendering. The middle wasn’t really laid out though.

Here is the first batch of thumbnails I produced. The vertical dark lines are there to take the gutter into consideration since the illustration is supposed to go accross two pages.

First set of thumbnails – No creature chosen yet

Garrett liked the idea of a camouflaged creature in the thumbnail I and suggested the creature be bigger and the character to walk in front of it without noticing it.

Garrett’s thumnail of a huge lizard camouflaged in the trees.

I went ahead and produced more thumbnails with this idea in mind.

Second set of thumbnails – It’ll be a Dragon !

Garrett liked the challenge of the thumbnail #3 and suggested we painted an even bigger dragon having its claw not over a small stream but a whole river.

We then worked together in a hangout doing paintovers of each other screen captures to end up with the following thumbnail. We agreed to work from there our way up toward the finished painting.

Side note – when you collaborate, one of the best things is to learn things from each other, like the word “Ferns” for example 😉

That was undeniably Garrett’s work and he did not slack there. He used random silhouettes for inspiration to produce these varied designs.

We selected two of our favourite options over video chat. Garrett agreed to merge them into the final design.

Final design for the Dragon

I used this finished design to merge our dragon in the thumbnail and continued working on it to improve the composition following Garrett’s suggestion of adding overlapping shapes to increase the sense of distance between the dragon and the foreground.

From this last thumbnail Garrett produce this highly detailed lineart.

Meanwhile I was researching color palettes for the time of day to look like a “hazy afternoon.”

I analyzed the color palettes of pictures we selected together as our targeted colors. I noticed the pictures had mostly analogous orange palettes, sometimes complementary with very unsaturated blues.

While Garrett was still doing the lineart I tried some colors on the previous thumbnail. Garrett was happier than me with those. But my liking of it improved when he suggested we did go for the complementary palette and use blues in the river.

Side note 2: That is also another great thing about collaboration, cheering each other up when we’re unhappy with what we’re doing.

When Garrett was done with the lineart I went ahead and place the colors in it trying to leave the least amount choices for Garrett to make in the last stage of the painting. I was hopping he would enjoy rendering better this way.

When I got to this draft I showed it to Garrett for review and he said he’d be really happy painting over this. I was surprised, I thought I had still a long way to go. But he convinced me he had all he needed to proceed so I was happy to let him do so.

Well I don’t know how he did it. That’s only Garrett’s magic here, so if you want to ask him about that I suggest you check him out and do so.

Like I mentioned before this illustration was created first as a chapter illustration for Encounters with the Imaginary vol 2. You can buy a copy of this book on the Boneshaker Press Gumroad store.

You can also get a print of it via Garrett’s Deviantart account.

And last but not least this painting is amongst other very intimidating and magnificent dragons in the currently ongoing Kickstarter for Dragons Tiny Artbooks. If you dig Dragons you should definetely checkout the campaign!